Under the fifty shades of grey from his hair to his shoes, Patrick Siu Chiu-shun, or Boy Siu as he is widely known in the multimedia industry where he is a veteran producer of mega performances and popular TV shows, has a star-studded world filled with a great variety of classic productions that have warmed the hearts of audiences worldwide. Recently honoured with the HKBU Distinguished Alumni Award and a current DBA student at the School of Business, Siu tells his behind-the-scenes stories from being a producer, to a businessman, to the founder of a social enterprise.

A first-mover, a record-breaker

With over 30 years’ experience in the multimedia industry, Siu Chiu-shun is the brain behind many talk-of-the-town productions, including Splendid Motherland, Miss Hong Kong Pageant, Jacky Cheung’s world tour concerts A Classic Tour, and Sam Hui and Alan Tam’s Happy Together Concert etc.

Siu started young in filmmaking, knowing exactly what his passion was.

“I remember my first time turning in a roll of film for a course assignment, back then when I was still in my junior secondary year. It was a film about the film industry in Hong Kong,” recalled the renowned producer. Those were the days when Siu was the only one in his class to go beyond the paper format. 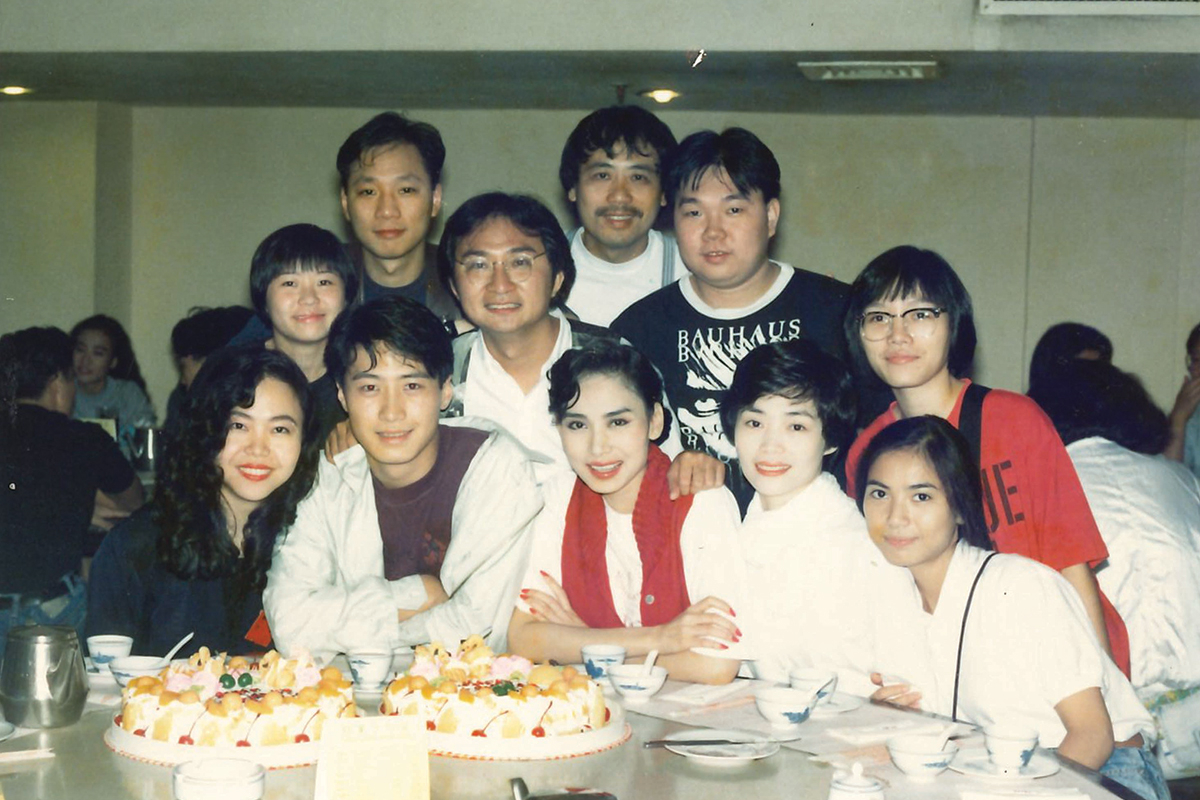 Having been in the multimedia industry for over 30 years, Siu is a close friend to many popstars. (First row, second and third from left: Leon Lai and Cally Kwong)

Siu was said to be an “AC Hall Major” not without reason. He signed himself up as a student helper for the HKBU AC Hall (Academic Community Hall) on the very first day in college. He spent uncountable days and nights on stage and backstage to acquire the production 101, which formed a strong foundation for his production dream to grow and prosper.

His first taste of la-la land happened when he championed a fundraising concert for the HKBU Geography Department, in which he secured to feature legendary popstars including Leslie Cheung (Gor Gor). The show made history for being the first-ever student-led concert broadcast live by the Commercial Radio Hong Kong. 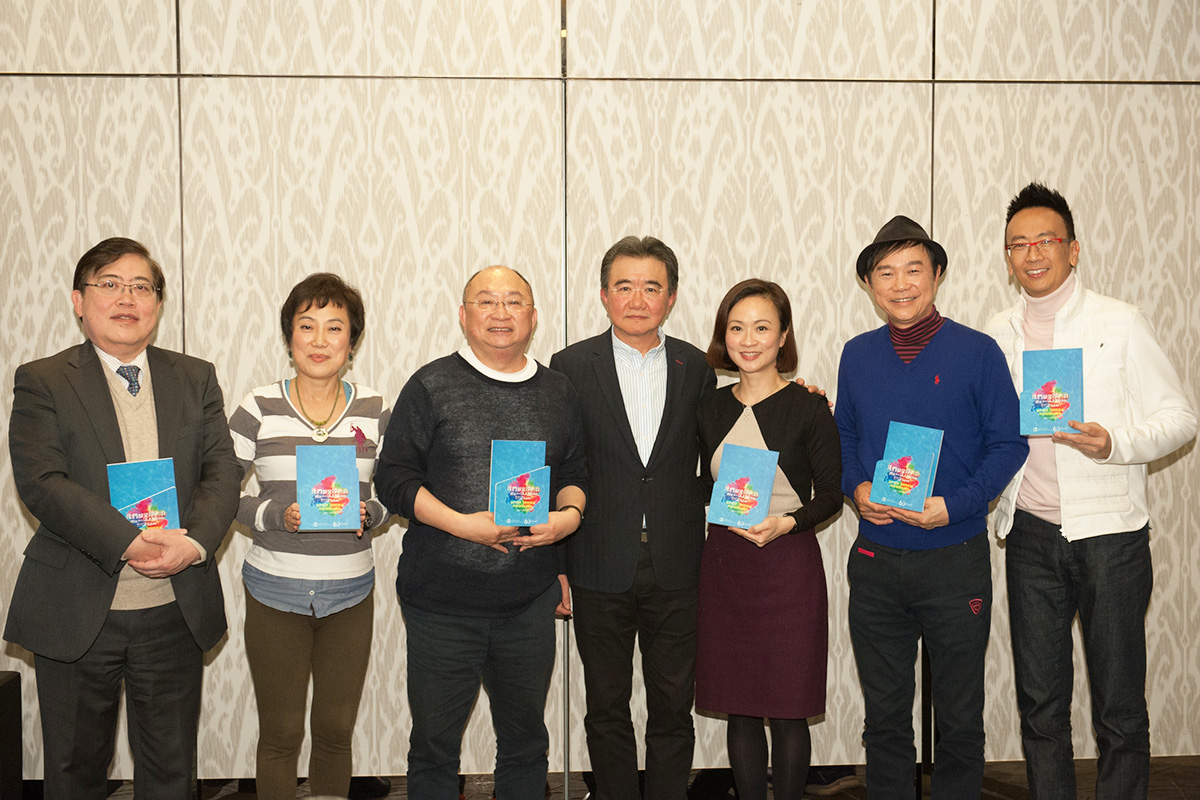 Siu was the leader of the sub-working group of “We are BUddies” alumni show during HKBU’s 60th anniversary, harnessing his creativity and expertise in multimedia productions to create a spectacular performance.

Siu worked at TVB for over a decade right after graduating from HKBU, where he came across his lifelong mentor, James Wong Jim (Uncle Jim), the cross-media creative legend of Hong Kong popular culture. They worked together on one of the very popular TV shows in his then capacity as Executive Producer of the TVB Variety Show Department.

“I always knew being bold and creative is the all-time recipe for successful productions, but I didn’t apply that thinking to my own career. It wasn’t until Uncle Jim encouraged and supported me to think big and step out of my comfort zone.”

Quickly after the founding of Wellfit Productions, the producer-turned-businessman recognised that the flexibility to create and explore outweighed everything else. TV programmes, world tour concerts, mega events and the final farewell of public figures – you name it.

Siu’s production house became part of a publicly listed company in less than 10 years, with many of its creative works acquired by TV stations in Hong Kong and beyond.

“Looking back, it would be my biggest regret if I didn’t think big and start the business.” 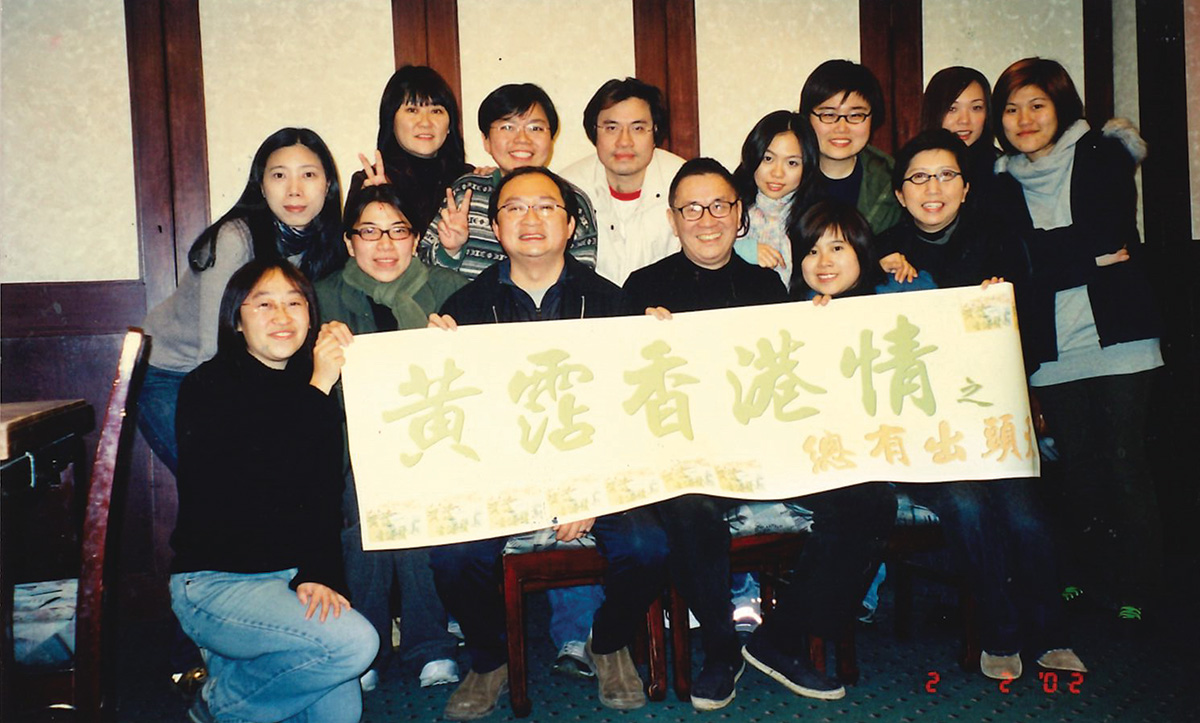 Uncle Jim encouraged Siu to think big and step out of his comfort zone, so he established his own production house, which became part of a publicly listed company in less than 10 years.

With all these years inside the hall of fame, some people asked Siu if he wanted to be in the spotlight. “I said thanks, but no thanks.” Unlike many who struggle between “do what you’re good at” or “do what you love”, Siu nailed both, all the time. He just didn’t stop there.

Sounds Great is a new enterprise established by Siu and his like-minded partners. It all started with a blend of two good causes: feeding the silver hair market’s needs for entertainment, and building an oral history archive of Chinese art and culture. 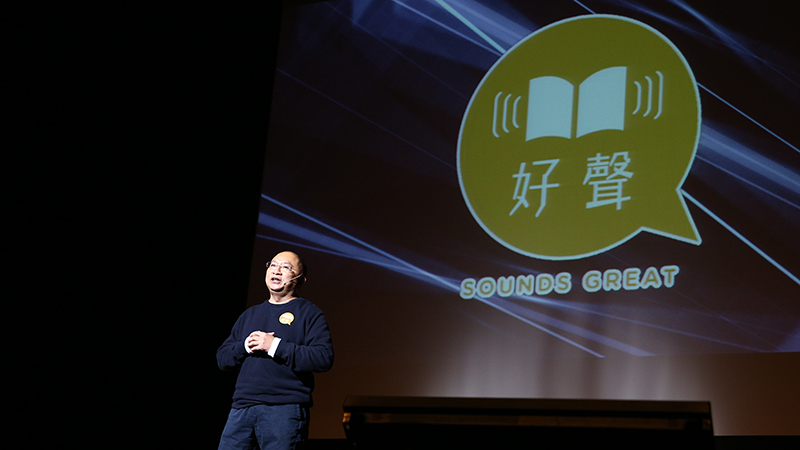 With support from the Home Affairs Department, Siu founded Sounds Great for the silver hair community.

“Knowing my mom and many others at her similar age could enjoy their day easily and free them from common age-related eye problems – that’s my daily dose of blessing before I go to work every day.”

Last year Siu decided to take one further step to pursue a Doctorate’s degree in Business Management at the HKBU School of Business to satisfy his craving for more sophisticated knowledge to support the years of experience he has gained from the multimedia industry, and refresh inspirations for his future work.

“Keep doing more of what you are good at doing with a good heart, you can’t go wrong.”

Siu has brought this to life. The butterfly effect of a good cause didn’t take long to surprise more. For its unique impact, Sounds Great attracted massive support from the HKSAR government and other sponsors, and is now registered as a social enterprise. More than 100 organisations and 20,000 people have benefited to date. 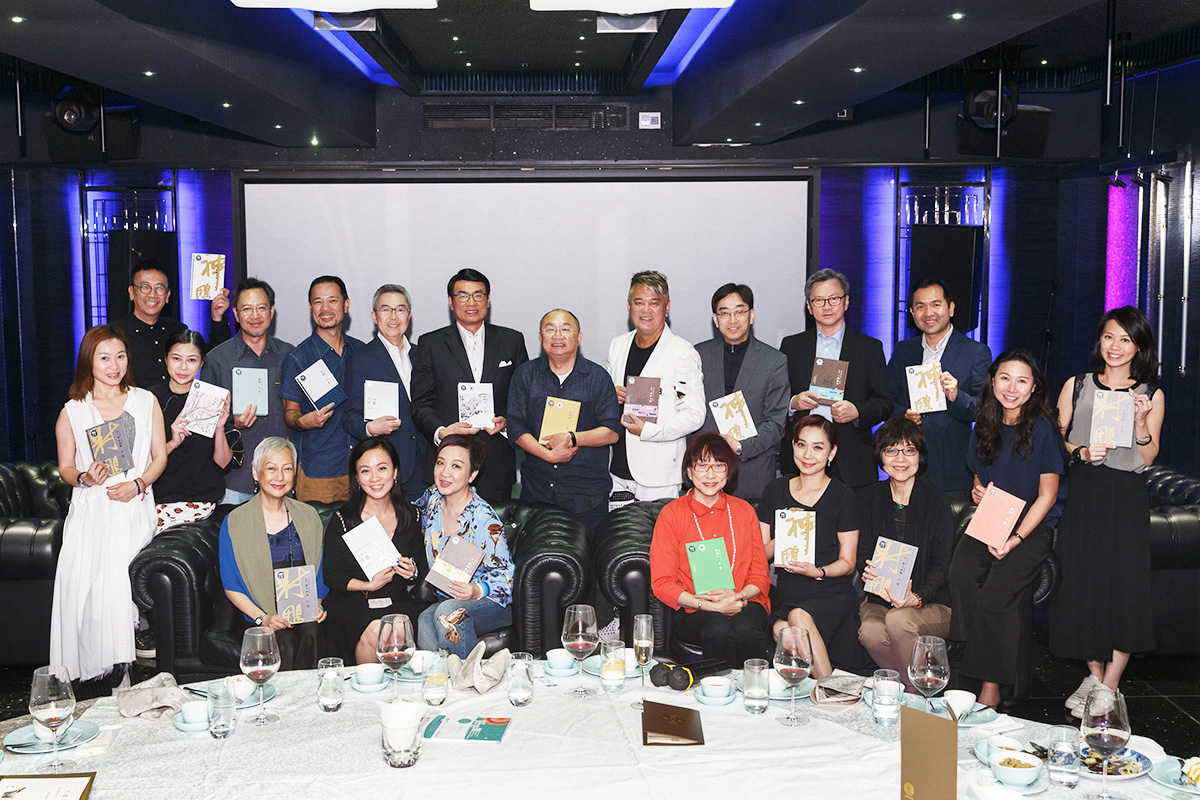 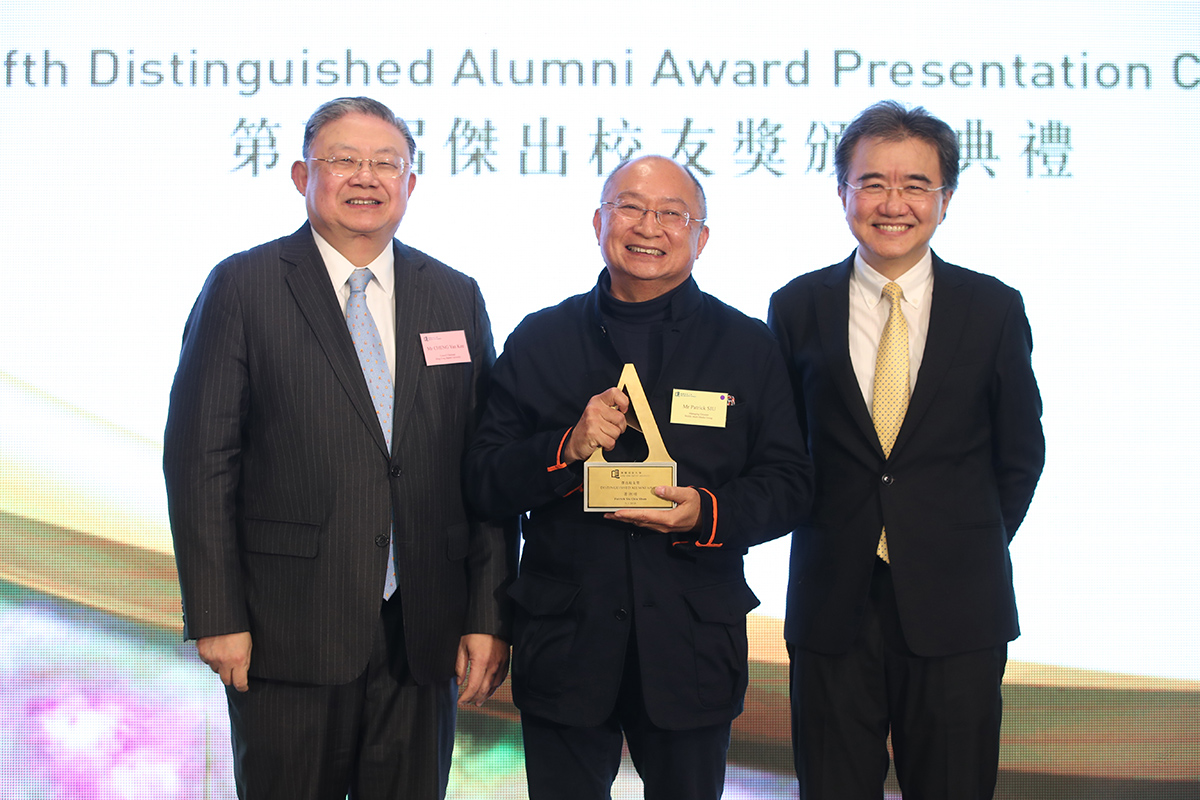 In recognition of his achievements in the multimedia industry and the community at large, HKBU presented its fifth Distinguished Alumni Award to Siu Chiu-shun on 9 March 2018, along with another three outstanding alumni. (From left: Chairman Cheng Yan-kee, Mr. Siu Chiu-shun and President Roland Chin)

Back to Alumni News