Let us recap the marvellous performances and enjoyable moments of the Final-round Contest by the highlight video provided below.

Result of the Final Contest

The list of awardees of the Final Contest is as follows:

Congratulations to all winners! 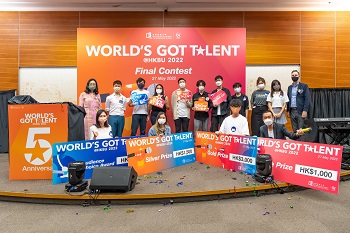 Eligibility
● All current HKBU students, faculty members and staff, except the finalists of the 2022 World’s Got Talent @HKBU, are eligible to join the game.


B. Audience-choice-award Game
[During the Final Contest] Eligibility
● All current HKBU students, faculty members and staff, except the finalists of the 2022 World’s Got Talent @HKBU, are eligible to cast an online vote.

Expand all Hide all

For Audience
Guess-the-winner Prize: HK$200 in cash prize
* The prize will be given to four randomly selected individuals among HKBU students/faculty/staff who take part in the online polling from 16 February to 27 May 2022 at 1PM and successfully predict the champion.  Finalists are not eligible to participate in the polling.

First Round Contest
A panel of judges will review all submitted videos and select up to 10 finalists based on the criteria listed below:

Final Round Contest
The Virtual Final Contest will be held on 27 May 2022 Friday at 7:30PM via HKBU YouTube.  The top ten finalists will compete in the Final Contest for the Gold, Silver and Bronze prizes, and Audience Choice Award.

The performance will be appraised by a panel of judges according to the following criteria:

Audience Choice Award will be presented to individual contestant or group who has amassed the most online votes from audiences during the Final Contest.  Finalists are not eligible to vote.