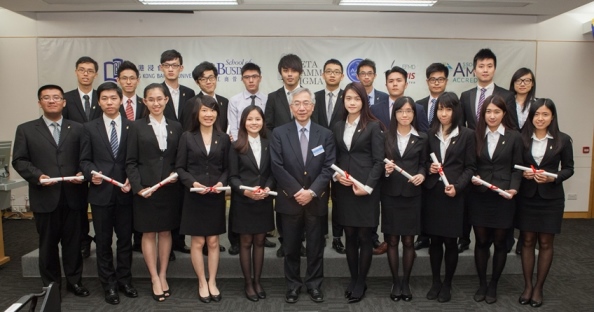 In the dialogue with new student members, Mr. Wu shared his personal philosophy - “Learning is like rowing against the current, if one does not advance, one will retreat”. Through sharing of his active involvement in student societies and extra-curricular activities during his early years at HKBU, he encouraged students to grasp every learning opportunity. As proof of his commitment to lifelong learning, over the past ten years, Mr. Wu has obtained postgraduate certificates from Peking University, Sun Yat-sen University, China National School of Administration and Central Party School of the Communist Party of China in Beijing and Guangzhou.

An overview of Qianhai’s development 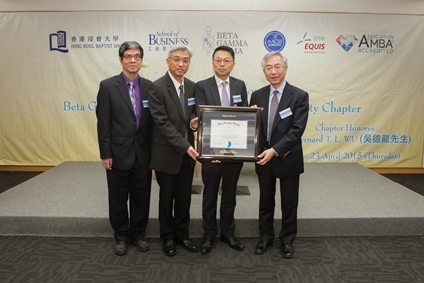 During the BGS Induction Ceremony, Mr. Bernard Wu illuminated on the latest developments in Qianhai and shed light on an array of opportunities arising from the preferential policies introduced by the Central Government

In an attempt to gain further insights, Dr. Cheng Yuk Sheng, Head and Associate Professor of Department of Economics, has met with Mr. Wu to further discuss.

In December 2012, President Xi Jinping positioned Qianhai as “relying on Hong Kong, serving the Mainland and facing the World”. Since then, the development has expanded from financial services to other areas, and under China's 12th Five-Year Plan, Qianhai aims to become a demonstration zone of innovative services, and eventually a leading service hub in the Asia-Pacific Region. In Spring 2015, Qianhai was designated as part of the Free Trade Zone in Guangdong, signifying its pioneering position in China’s economic reform. 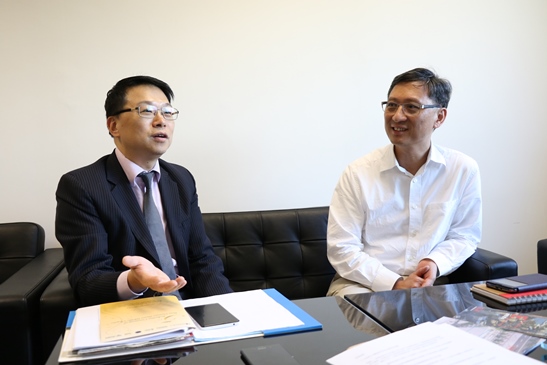 Dr. Cheng explains that the Central Government utilises the “Negative List” approach to administer investments in the zone, i.e. anything not on the list can be done. This is in sharp contrast to the original policy, under which every project required prior approval from administrative units. The new approach aims to attract foreign enterprises into the zone, especially targeting at enterprises in Hong Kong. Incentives include a reduced corporate income tax rate of 15% for qualified enterprises, and potentially a 2-year, 3% discount in loan interest, or a one-time subsidy of half of the company’s registered capital, with both capped at RMB 2 million.

“In the industry, everyone was disappointed by the deficiencies of execution details in CEPA,” says Mr. Wu, “We often describe the arrangement of CEPA as ‘big doors are open, but small doors are not yet open’. Against this backdrop, the establishment of Qianhai, as part of the Guangdong Free Trade Zone, raises the hope that such implementation details can be ironed out, so that Hong Kong services industry can leverage and pioneer the growth in China.”

“Another policy that might be of interest to HKBU School of Business students and alumni is the launch of Qianhai Shenzhen-Hong Kong Youth Innovation and Entrepreneur Hub (hereafter as “E Hub”). The E Hub aims to provide innovative entrepreneurial base for young people, in the form of multi-dimensional start-up support including seed money, training, business consultation and networking platform. The E Hub also offers quality office space at concessionary rates and provides access to angel investors and venture capital.”

“Interesting projects are recommended to the E Hub via its collaborating education institutions and NGOs in Hong Kong. Currently there are nine of such ‘Entrepreneur Project Recommendation Platforms’ in Hong Kong, with HKUST being one of them. In the future, we can work together to bring HKBU into the picture to recommend good entrepreneurs amongst us to join the E Hub,” says Mr. Wu.

“In recent months, the Guangdong Provincial Government actively seeks internship opportunities for university students in Hong Kong, and given that Shenzhen plays an important role in leading technology driven enterprises such as Tencent, it proves to be one of the best training grounds for Hong Kong graduates to connect to the business world of China. I would highly recommend entrepreneur wannabes at HKBU to grab any of such opportunities that are hard to come by.”