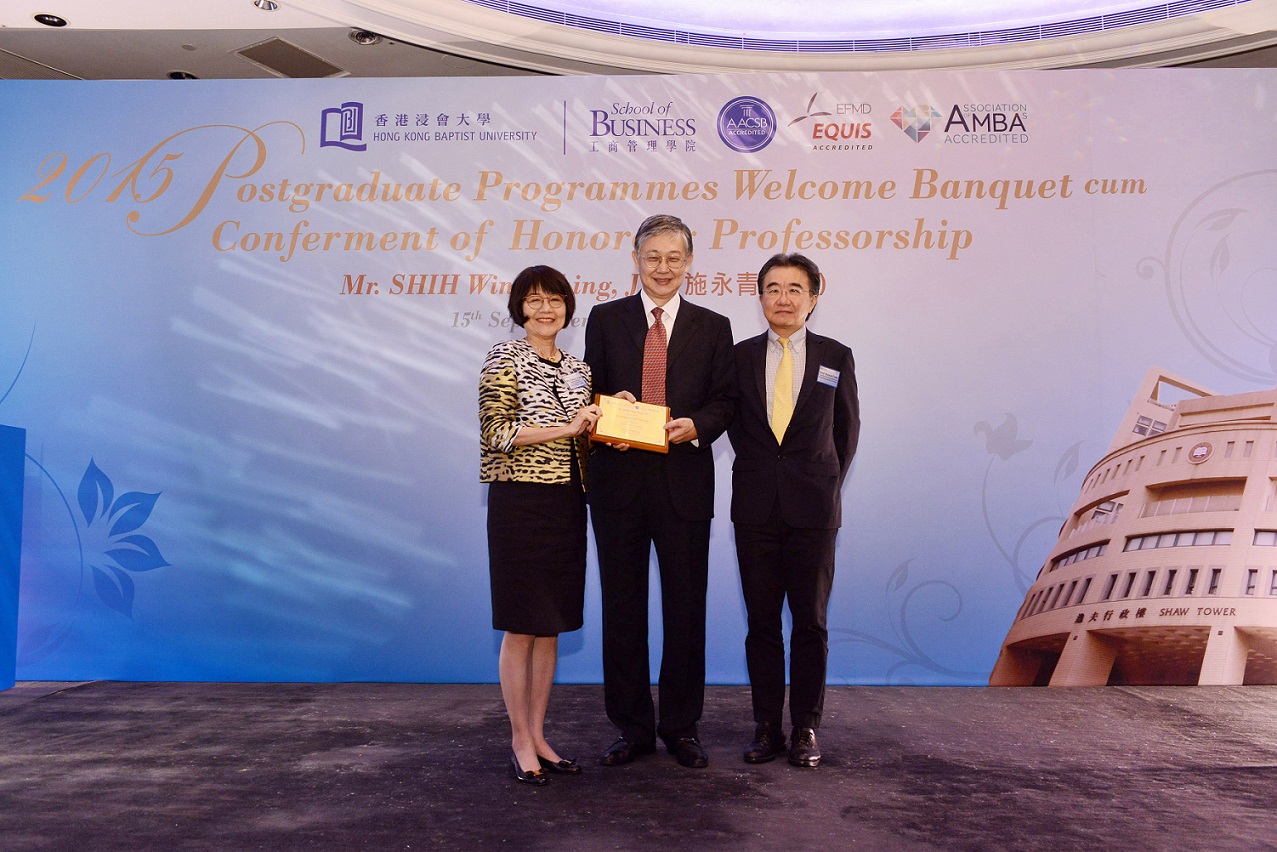 The School of Business conferred an honorary professorship to the founder of Centaline Group and am730, Mr. Shih Wing-Ching, JP as recognition for his outstanding achievement in entrepreneurship and management on 15 September 2015.  The ceremony also marked the beginning of the academic year for our new postgraduate students.

New HKBU President and Vice Chancellor, Professor Roland Chin, welcomed over 400 new postgraduate students, quoting words from Martin Luther King Jr to explain the essence of education.  “We must remember that intelligence is not enough. Intelligence plus character-that is the goal of true education.” “We must establish our unique character that comes before being intelligent,” said Prof. Chin.  He also encouraged students to do the right thing and contribute to the society.  “Be the leader with vision and make, no matter significant or subtle, changes to the world.”

Interview with Mr. Shih Wing-Ching
Popular and outspoken, the name Shih Wing-Ching always associates with the property market in Hong Kong, as Mr. Shih’s major venture, Centaline Group, is the leading property agent not only in Hong Kong but also in Mainland China.  While his words of wisdom always appear in his paper am730, the School had the chance to hold a short interview with our new honorary professor on the topic of Entrepreneurship. 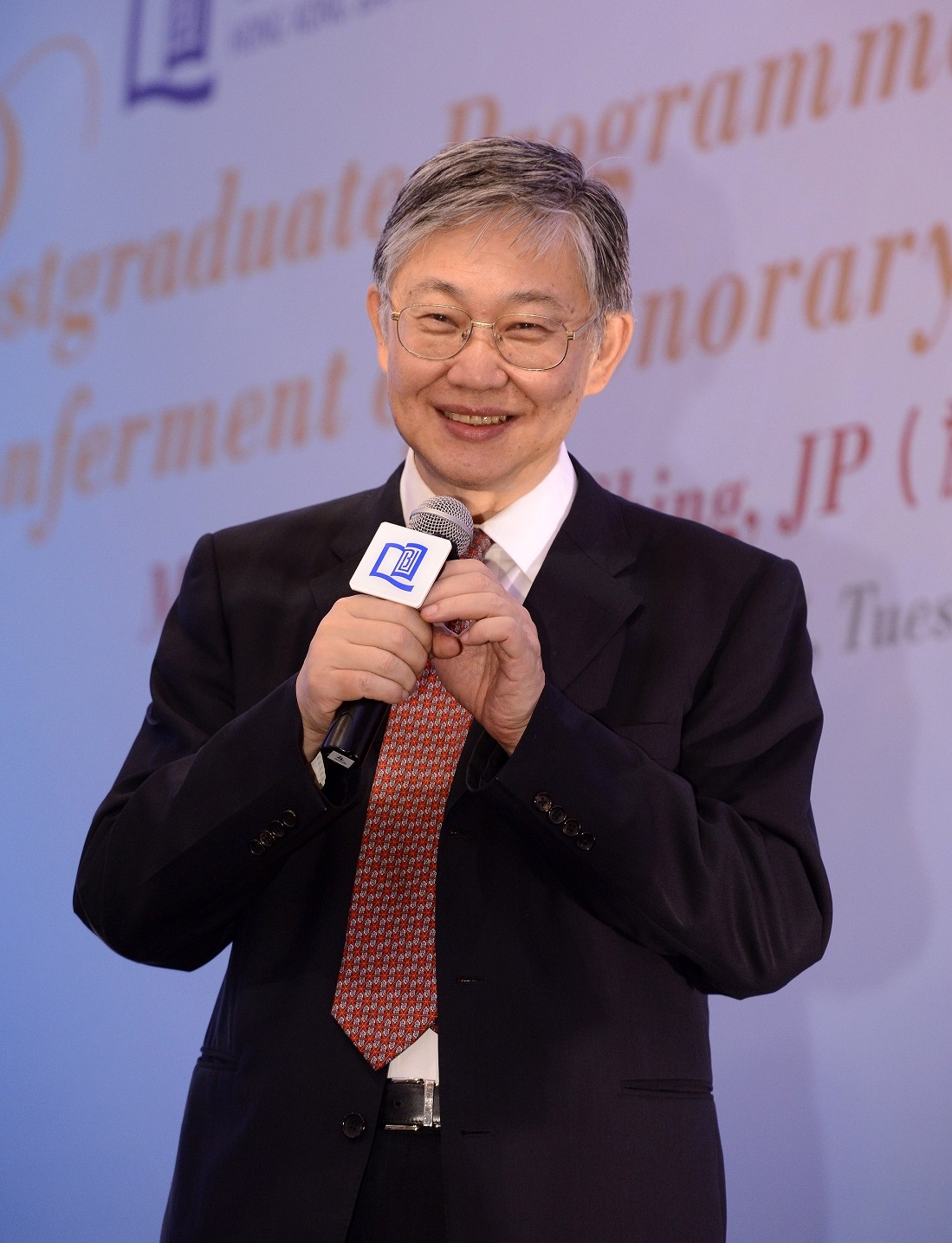 “What, in your opinion, is the quality of a successful entrepreneur?”

“I believe one does not have to be very smart to start a business.  You just have to have the right passion and determination,” Mr. Shih divulged.  “Before I started Centaline and while I was still an employee, I strongly felt my contribution to my company was not proportional to my pay.  And that feeling of inequality prompted me to start my own business.”

“With my own business, I can dictate my own agenda and tempo, and not be restricted by someone else.  That was also a major motivation for me,” Mr. Shih further explained.  “A person, with nothing to lose and fall back on, is also more likely a successful entrepreneur.”

The current state of the global economy may not be the best time for entrepreneurship, you views?

“Anytime is the best time to start a business,” said Mr. Shih. “In all generations there will be great entrepreneurs.  Take Wang Wei of S.F. Express as an example.  He was a delivery guy in Shum Shui Po in the early 90s on a motorbike, but he made it all the way to the top, owning a few aircrafts now.  History had shown, that at every era, there will be many great entrepreneurs.”

“One, who wishes to start business, has to understand that China is undergoing big changes now.  The speedy economic growth in the past few centuries has been hit with a bottle-neck.  The once money milking manufacturing businesses had hit rock bottom in recent years.  And corporations turned their heads from export oriented businesses to satisfying local needs.  Entrepreneurs had to recognise that, and find the niche that suits the current situation.  I had found my niche at my time when property agents were not doing their job of servicing clients but relied on speculative investments.  Centaline bridged that difference, offering customer oriented services, and hence came the success.  Young people nowadays had to find that niche today’s world needed.”

“I started Centaline with HK$5,000 in 1978, and that was around two to three months of pay back then,” Mr. Shih explained.  “I don’t see anyone who are determined to start business have difficulty saving up that amount.  If you talked about property rental, the current Hong Kong rental prices is not at its highest, we had seen higher prices in the 80s and 1997.”

“For start-up funds, hot money had been floating around in the past years since the start of QE (Quantitative Easing).  It is not hard to find angel fund now, as long as you have the story to tell.  A story that sells.  It’s not too difficult actually.”

Any last sharing with our Business Bridge readers?

“Last week, while I was on a train from Guangzhou to Hong Kong, I met this old guy sitting next to me.  He was an early entrepreneur of Hong Kong, starting plastic businesses in Hong Kong and then China.  He shared with me how he switched from plastic to electronics industry, and later on again to manufacturing of circuit boards in mobile phones.  He didn’t have much education and funds when he started, but as times goes by, his experiences, his knowledge and his wealth all added up.  That put him through many ups and downs, and he is still trying something new today.  The road for our young entrepreneurs is always there, for the one with passion and perseverance, as it has never been an easy path.”

Profile of Mr. Shih Wing Ching
Mr. Shih Wing-Ching, entrepreneur and an activist in charity and philanthropy, was born in Shanghai and brought up in Hong Kong.

In 1978, at the age of 29, Shih jointly started Centaline Property Agency Limited (“中原地產”) with his classmate on a capital of $5,000 each. The group now grew to become one of the largest property agencies in China, achieving multi-billions of commission income and service fees from businesses in the mainland.

In 2005, when few were optimistic about media businesses in Hong Kong, Shih took 100 million from his personal savings and launched the now-leading free newspaper, am730. Till now, Shih continued to be an active columnist on his own paper, sharing his unique worldviews, giving insights as an entrepreneur and detailing life experiences.

While highly successful on the business frontier, Shih donated all his shares in the Centaline Group in 2008 to his charitable Shih Wing Ching Foundation (“施永青基金”), in support of the farming population in Mainland China. Later in 2010, Shih also injected 76% of his shares in am730 into his foundation. In support of entrepreneurship in Hong Kong, Shih started the am730 Startup Fund in 2011 to fund local start-ups, and to continue his management philosophy of developing through self organizing and cooperative development based on the fair distribution of newly created wealth.