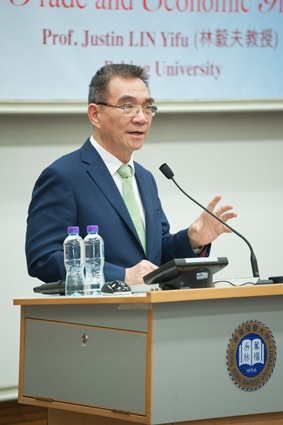 School of Business invited Professor Justin Lin Yi-fu, Professor and Honorary Dean of the National
School of Development and Director of Center for New Structural Economics at Peking University, to speak to 250 participants during a lecture delivered on 8 November. The lecture was organised under the Shun Hing Distinguished Lecture Series,
sponsored by Shun Hing Education and Charity Fund, to celebrate the University’s 60th Anniversary.

At the lecture, Professor Lin discussed “how to revive trade and economic growth in the world”, with reference to the trade growth rates of different countries from 2010 to 2015. Professor Lin had observed that, as the world’s second largest economy, China was not alone in its deceleration of growth. Major developing or developed countries all suffered from the same problem.

When shedding light on the ways to growth, the former Senior Vice President and Chief Economist of the World Bank pointed out that, given the difficulties of carrying out structural reforms and the lack of investment opportunities
in developed countries, only by supporting infrastructural investments in developing countries can the world see light at the end of the tunnel. 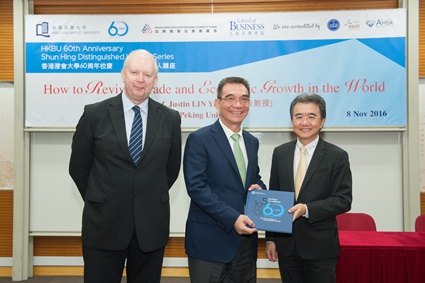 Not dismissing the possibility of economic recovery in developed countries, Professor Lin affirmed China’s
positive contribution to global trade growth. In 2015, China took up almost 15%ofglobal gross domestic product. The investments in developing countries can surely create export opportunities for developed countries. It will help mitigate the unemployment problem and alleviate the national debts in the latter.

In his welcoming speech, Professor Ed Snape, Dean of School of Business, expressed that he was delighted with the intriguing topic of the lecture. Against the backdrop of economic uncertainties over the past decade, which included housing bubbles, bursting stock markets and stagnation in some countries, the lecture was arranged at the right time. 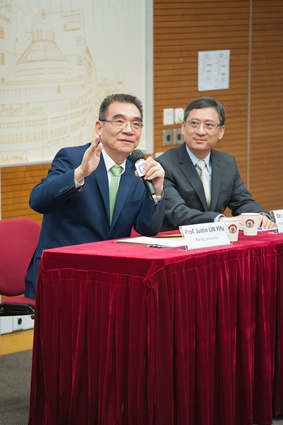 of Economics, commented Professor Lin for the breadth and diversity of his research. His series of research papers on agricultural reform have made a great impact on the study of economics. Professor Lin’s scholarly work has not only improved background knowledge about China, but also greatly enhanced our understanding of economic institutions in the course of development. Furthermore, Professor Lin has made important contributions in nurturing young scholars through his research centres.

The Q&A session of the lecture was equally intriguing. Questions raised touched on when should the Renminbi be fully convertible, and the role and rules of the Asian Infrastructure Investment Bank in facilitating investments in developing countries.